I’m at home now after a night spent at the police department. Me and three of my comrades were arrested for showing our disapproval to Nazis, who came to the International Russian Conservative Forum that was held in Holiday Inn, St. Petersburg 22nd of March. If you don’t know what was hidden behind their « traditional values » discourse, you can read this article. 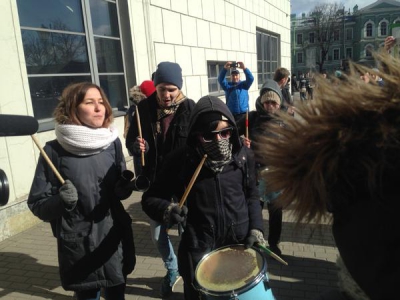 Three agogos, three drums and one little pot – this was what we used to make sure Forum members would hear our unwelcoming call. Our message for Forum members who didn’t understand Russian was simple: « Nazi, fuck off! » We also had one banner in Russian, which was: « Net fashizmu vseh mastey, ot podvoroten do vlastey! » (“Deny fascism of any kind, from backstreets to government height!”) After we finished playing, the most interesting part of the day began. Police officers kindly welcomed us with their “warm” hugs. Some of us tried to escape their friendship, and some of us managed to. Two of our comrades could escape thanks to somebody who unlocked door of the police car when police was distracted because of an activist wearing “Orthodox church or Death” shirt who ripped a poster that said “We defeated Nazis in 1945, and we will defeat them in 2015” and hit a person holding the poster in the face and (he was set free soon). Me and Zufar took their generosity and placed ourselves at the back of an the police car, a special car for people like us. That was at 1:30 PM. At 2 PM we were driven to the police station №29.